Drink ‘Til It Helps 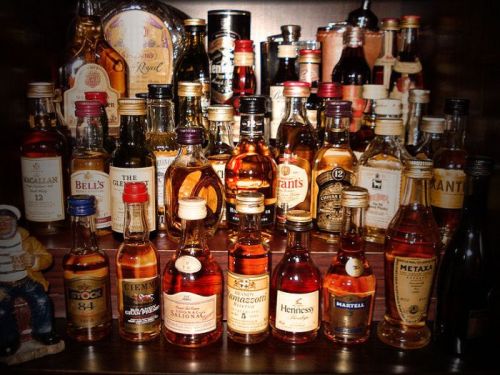 "The first glass is for myself, the second for my friends, the third for good humor, and the forth for my enemies." - Sir William Temple

I didn’t start drinking until I was almost 22 years old.

It wasn’t like I was bowing to overbearing religious pressure or because alcoholism runs in my family and I didn’t want to unlock the fiend gene.  No, I had opted to ignore the strictures prescribed by my childhood faith long ago and my family has produced no more winos than your average American clan.  For me, I think it just came down to the fact that I couldn’t find a good reason to start.

Ever since I could remember, I was always the life of the party.  If there was conversation, I was in the middle of it.  If there was laughter, I probably instigated it.  If there was music, I danced hard.  Unlike some of my more introverted contemporaries, I didn’t need a social lubricant.  Even when I was undergoing the process of joining one of Harvard’s elite Final Clubs, famous for hosting parties where liquor flows as freely as the women who frequent their doors, I didn’t partake.  And at the time, I kind of believed that it would go on that way forever.

Looking back, I should have known that it would be a woman that would eventually drive me to drink.

In the interest of modesty (not mine, but hers), I won’t go into the details.  But let’s just say that I wanted our relationship to go to place that she did not.  Already having drunk deeply from an emotional cocktail formed of equal parts anger, frustration and lust (I like to call it “Palpatine’s Punch”), I decided that it was time to get chemically inebriated as well.  So I drank Smirnoff, I drank Bacardi 151…I just drank.  And I got TWISTED.

The thing is, despite almost losing control, nothing that happened was outside of the realm of my 22-year-old identity.  I mischievously embarrassed my friends, I freestyled interminably, and I made out with a girl with whom I had had no previous sexual encounters.  Fun, fun, and more fun.  It was all me, just at Level 10, and I happily duplicated this experience plenty of times in the years that followed.

Of course, turning the volume up to Level 10 doesn’t always mean that the music is gonna be upbeat.  There have been more than a few times when the song that played was deeply, deeply dark and disturbing.  I’m talking about torrential tears and mumbling with despair disturbing.  I’m talking, “Go walk a couple of miles in the NYC winter so that the wind can slap you until it cuts your face because you’re alone and no one actually cares that you exist so just freeze since you’re ice inside anyway.”  Yeah, like that dark and disturbing.

But guess what?  That was me, too.

I’ve come to embrace these inner visions, even when I don’t like what I see.  Even when I don’t know what the fuck I’m seeing.  Perhaps I enjoy the latter even more than the former – it’s then that I get answers to questions about me that I didn’t even know I had.  It’s like Jeopardy: The Me Edition.

And it’s with that in mind that I implore you to devote one day out of every month to getting unapologetically, undoubtedly drunk.

Now, before you go alerting MADD and AA and the NAACP and S.H.I.E.L.D., I’m not advocating drinking to the point where you lose control of your bladder.  Trust me, I’ve done it, and it’s NOT as refreshing as it might seem.  I’m just asking you to push yourself past the point where you start to want to make some bad decisions, and then halt just before you’re no longer able to define what a bad decision even is.  Once you master this ability, let’s call it the Drunken Dance, you’ll be able to drive yourself to the brink of shitfacedness while staying safely in the realm of passionate self-discovery.

Of course, if you know that you can’t handle your liquor, please disregard everything that I’ve written above.  No one wants to deal with an idiot who transforms into a complete dungmuncher if they even smell a Corona.  That goes for you, Mr. Space Invader and for you, Ms. Sloppy Slutnasty.  Back away from the margaritas and Jäger shots, thank you.

For those of you for whom drinking is not a fast-track to Loserville, I welcome you to heed my advice.  Let yourself go…at least once a month.  You owe it to yourself.  Besides, you’re probably too broke, too busy, or too afraid of the stigma to seek real professional help anyway.  Drinking is way cheaper, plus how often can you leave your therapist’s office with a hot little thing on your arm?  Double win!

Me, Myself and I: Children of the Selfish Gene

"'I Love Me, Myself, And I And the Whole World,' wouldn't fit. So I just left the most important part."

Let me begin by saying that I have yet to read the Richard Dawkins book to which the title of this post refers.  With that said, I’m aware of it’s overall premise.  Plus it’s on my summer reading list, so shut your bleeding hole.

For those of you who are equally unwell-read or just damned ignorant, the idea is not that there is a singular gene that determines the presence or degree of selfishness in an organism, but that genes are the fundamental forces behind the evolutionary process, powerfully pressing down the path pointing to the peak probability of their propagation.  (Yes, I did that.)

Consider the tragedy of the male praying mantis, who the female often kills after copulation.  Why does he engage in this fatal behavior?  No, it’s not ’cause mantis females really know how to work that thang…whatever that would mean to a lime green, awkwardly shaped insect with pointy spines on its appendages.  (That’s a recipe for bad foreplay if you ask me.  But whatever.)  According to Dawkins, it’s because their genes are on a mission to ensure that they get copied – at any cost – and it’s only when an organism is intelligent enough to understand its own interests as distinct from its genes’ interests that it can rebel.

That brings us to good old mankind.  We’re pretty smart as animals go, so do I think that we’ve come to the point where we can ignore the pressure to act in our genome’s best interest?  Yes, I do.  But I’m not talking about situations in which parents die for their children or some guy donates a kidney to his aunt.  After all, these are simply the undercover machinations of selfish genes.  Those folks may suffer somewhat individually, but for their family’s shared genes it’s a net positive result.

No, I’m talking about the times when a total stranger takes a bullet for someone else or, in an everyday context, a volunteer spends a few hours a week helping underprivileged kids with their homework.  I can’t think of an argument that would explain how these acts help further the proliferation of their genes at all.  How sweet.

But not so fast.  Since the heroes aren’t acting in their genome’s best interest, does that mean that they’re being altruistic?  I say no.  Humans can short-circuit their programming and ignore their genes, but they simply cannot pull away from the warm embrace of selfishness.

On those rare occasions when we rise above our embedded biological imperative, we don’t replace selfishness with altruism.  We just replace the source of the selfishness: instead of sprouting from our genes, it flows from our ego.  That stranger takes the bullet because they’re motivated by a sense of duty.  The volunteer heads down to the youth center on Tuesdays and Thursdays for the same reason.

This notion of duty is inextricably tied to the notion of honor, and where there’s honor, there’s ego.   There’s the desire for self-aggrandizement.  There’s Me, Myself, and I.  Heroes big and small are willing to give their lives, or at least portions of them.  That’s certainly true.  But they do this to get a bigger life in return, and that bigger life exists in the psyche of others.  Where’s the sacrifice in that?

When Dick spends three nights in one week at his girlfriend’s place in Blüdhaven, even though he lives and works in Gotham, he ain’t doing that shit for his health.  On top of the sweet, sweet lovin’ she delivers, he also garners increased real estate in her heart and mind, all because he demonstrated a willingness to trade his convenience for hers.  This translates to real social currency, redeemable in the future.  I mean, why do you think they call them coochie coupons?

Now, take that social currency and multiply it by like, a gazillion.  That’s the kind of ego cash that heroes and philanthropists rack up when they do what they do.  Risk your neck for enough folks and you can become larger than life.  As a matter of fact, you don’t have to risk anything.  You just have to make people believe that whatever you did was all for them.  A certain Galilean Hebrew and his PR team pulled this off about 2000 years ago, and whether or not it’s true, dude is now like, the biggest superstar ever.

So, the next time you do something good for someone, think about that cascading warmth that you feel.  I’m willing to bet that it’s not coming from some inner spring of beautiful intentions.  Nope.  It’s just the excess heat generated by your rapidly inflating hot air ego balloon.