Holleration and Harassment on the Streets of New York 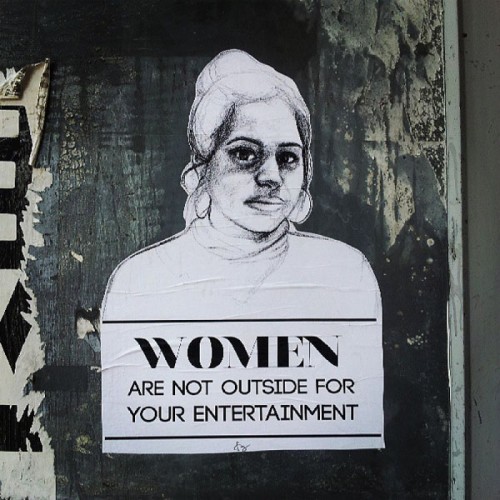 There are men who believe that come hither witticisms such as, “Must be jelly, ‘cause jam don’t shake like that,” “You’ve got a great future behind you,” and “COTDAMN THEM SOME BIG ASS TITTIES,” might actually induce a woman to produce a bodily fluid other than vomit. Most of us know that they’re wrong. The thing is, fellow penis-pushers, “Hi, how are you?” and “Good evening, beautiful,” are now considered cringeworthy microaggressions, too.

That’s the major lesson I gleaned from the Hollaback street harassment video that’s been bouncing around for the last few days. It’s bad news for regular cats like me who are only occasionally creepy and who really try not to contribute to women’s sexism-related stress. Heaven knows y’all have enough going on as it is, what with trying to figure out what shade of lipstick goes best with your new Givenchy Antigona bag and all. Unfortunately, Hollaback makes no distinction between what’s complimentary, neutral, or offensive, so we can only assume that everything that they show is presented as an example of gross male behavior.

Lucky for you, being the good little amateur social scientist that I am, I took a closer look. I watched the video at least 10 times, carefully tallying each statement that I heard, assigning them to positive, neutral, and negative categories. In the end, I came up with 45 separate statements, classifying 18 of them as positive, 3 as neutral, and 24 as negative. (If you want to nitpick the spreadsheet I used to log each statement then be my guest, hotshot.) While 24 sexist comments are about 24 too many, the fact that I would characterize nearly half of the statements as non-problematic kind of disturbed me. Are some women overreacting, or am I just being phallically insensitive?

I ended up concluding that both answers are likely true.

I find it hard to believe that anyone could paint those 21 comments I labeled positive or neutral as sexist in good faith. On Facebook, a woman commented that “all that false politeness is definitely swaghili for ‘Hi, you want some dick possibly maybe?’” First off, “swaghili”? Second, here’s a newsflash: 90% of the compliments a woman has ever received from an unrelated man about her nice dress, great hair, or perfect face were preceded by a fantasy of removing said nice dress, pulling said great hair, or twisting said perfect face into an ecstatic grimace. Still, you can’t punish a person for thoughtcrimes—yet—and besides, there’s nothing wrong with sexual desire in and of itself. If a woman is offended just because she can sense that a man is turned on by her, it’s not his fault. Right? Well, no, but, I can understand why she might feel that way.

Unfortunately, it’s become difficult for a lot of women to differentiate between kind words from an admirer and the prurient drivel of a sleaze: the din from the latter is simply too deafening. Shit is so out of hand that some women are compelled to question not just the motivation for advances, but the very nature of communication from any unknown man. It’s as if the invisible expanse that transmits positive energy from man to woman through good game, which I’ll call The Hollerational Field, has been unnaturally warped by bad actors.

Instead of seeing a colorful pitchman for a shady money lending establishment, we see a weird old dude flagrantly objectifying a passing woman. (“I just found a thousand dollars,” he says as he holds out what looks to be money at 1:15. Found. Not saw.) At 0:50, instead of seeing a polite young man bid an attractive lady good morning and continue on the path along which he already happened to be walking (this “scene” starts and ends with our heroine and her would-be antagonist walking east on 125th St.), we see a male threatening a female by invading her personal space for five scary minutes. Either classification could be true, but an anger that has been honed to a fine point by fear presses hard into women’s backs, nudging them toward the harassment side of the room. The good guys didn’t contribute to this development, but if we care about our sisters then we do have to shoulder the burden of the existing reality.

So, I try not to stare. (Waiting until she can’t see me and then rubbernecking until I almost run into a street sign doesn’t count as staring, by the way.) If the power of the gonads is just too difficult to resist and I find that I absolutely must compliment a woman, I raise my voice like 1.5 octaves and smile like a Mormon. And if I’m in a bar and a woman asks me to pretend like we’re together in order to throw off an unwanted pursuer, I do it…even if she’s not cute. It’s all in an effort to balance the scales.

The good news is that there’s still some room for wholesome street-level holleration. A few years ago, I saw a bombshell walking down a busy New York City street and let her pass me by. As luck would have it, I peeped her again the very next day, and wasn’t about to let history repeat itself. I literally ran half an avenue block to catch up, calling out to catch her attention. When I reached her, I looked her in her big, brown eyes and told her she was gorgeous, amongst other things. Not wildly inventive, true, but I delivered it with Clintonian conviction, and we ended up dating for almost two years. True story. Then again, she broke my heart, so maybe I should’ve just asked if she had a mirror in her pants and kept it moving.