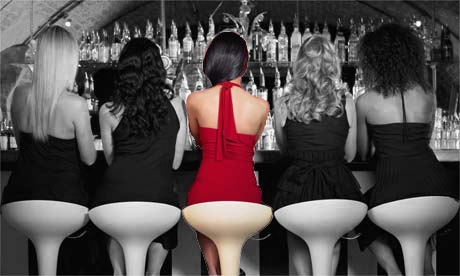 Were you listening to me, or were you looking at the woman in the red dress?

Last time around, I wrote about the stresses of navigating the choppy seas and treacherous winds of the infamous Girls’ Night Out.  If you’ll recall, I made mention of the darkness that is the dreaded Circle of Death, a terrifying feminine fortress that has dashed more men’s hopes than Obama’s first term.  Oh, that circle may look harmless enough, but be ye not fooled.  These sirens‘ greatest joy is to toy with a man, leading him ever closer to their shores until, before he knows it, his ship is splintered on their estrogen encrusted rocks.

Even if you’ve got Travolta’s moves, look like that kid Eggs from Trueblood, and are a certified mack daddy, you might still get totally crossed out.  This leaves a lot of us handsome, skilled dancer types scratching our heads.  “I was polite.  I smiled.  I didn’t stare at her breasts (that much).  Why did she diss me?”

To fully grasp what’s going on here, you’ve got to understand the basic structure of female social group dynamics.  Surprise, surprise, they’re strikingly different from those of males.

Male social groups are organized pretty much like fighter squadrons.  They can execute coordinated attacks, but are completely willing and able to break apart as necessary to accomplish the current mission.  On the other hand, female social groups operate using a totally different configuration.  More often than not, they’re arranged like teams of escort fighters aligned with a single bomber.  Those escorts will fight tooth and nail to protect that bomber, and would rather crash and burn than lose it to the testicularly endowed enemy.

Each group member has a role to play in the sociosexual war, and though the lyrics change from crew to crew, the song remains the same.  Here’s a quick rundown of the usual cast of characters:

Wherever she goes, Prom Queen is the center of attention.  When she’s around, heads turn, eyes widen, tongues wag.  The spotlight shines steadily on this scion of Venus and more than a little on anyone around her…which is why her friends are so fiercely protective.  She’s one bangin’ ass bomber and they’re her zealously protective escorts.

If some dude comes along and snatches her up, they’re afraid that they’ll have to kiss the attention leftovers goodbye and prepare for a long, cold winter.  That ain’t about to go down, at least not without a fight.

When a dude enters Prom Queen’s airspace, the escorts immediately fly into defensive formation.  Instead of clearing out to give you room, they remain half an arm’s length away, shooting mind bullets indiscriminately and hoping that the initial barrage alone is enough to dissuade you.  Assuming you bravely continue, they’ll move on to such battle-tested tactics as Intermittent Interruption, in which they make excuses to fuck up the flow of your conversation with crap that not even their nosy ass mother would care to hear.  “I think I found a new spin instructor.  Cortez is fabulous!”  What?!  The fuck outta here with that buuuhlshit!

Anyway, if all else fails, they bring out the big guns.  That’s when someone nonchalantly says, “It’s corny in here.  Let’s go.”  That person is usually Big Mama, and Runner-Up and Ugly Betty are almost always down to follow her nut-crunching lead.  At that point, you can only hope that you’ve fired enough well-placed shots to disrupt communications between Prom Queen and her escorts, enabling you to separate her from her crew and finish the job.  If not, you may as well say your prayers.  ‘Cause you’re gonna die.  When your plane crashes.  Metaphorically.

And that’s too bad.  I really wish women would understand that their pretty friend need not be their only path to attention from the opposite sex.

F*ck Girls’ Night Out: Part I

Guess which witch was my one wish?

Unless you’re suffering some severe mental dysfunction, you realize that this means that you’re going to be in a social setting, i.e. around other people. Presumably, you also comprehend that a significant portion of those individuals will be of the opposite sex. For straight men, that last tidbit is not just an assumption, it’s actually a desired outcome. If we get to a bar or club and the place has more wieners than a Berlin beer garden in October, we will be none too happy. The artist on deck could be the reincarnation of J Dilla, Beethoven and Marvin Gaye all rolled into one, but sheeeit…ain’t no music that fuckin’ good. For men, women are to social events what ketchup is to hood cuisine: they just make everything better. Without them, shit is just shit.

From my experience as a storied amateur sociologist, females seem to have a similar need for the presence of males when they’re out and about. Heck, I’ve certainly been out with my homegirls and heard them complain about girl-heavy parties I’ll affectionately call “coochellas”. If this is true, it would appear that harmonic equilibrium is maintained. But see, that’s where everything actually goes completely batshit CRAY.

Although women certainly want us around when they go out, far too often it seems that they really only needs us to function as a sort of final aesthetic touch. Whereas women are a must-have for any self-respecting man when he’s out to party, no matter if he’s booed up or lustfully single, this is far from the case for the fairer sex. For them, going out with their girlfriends is the process by which they strengthen the bonds of sisterhood through the creation of common memories. Men are only useful in as much as they further the feminine bonding agenda.

If women are our ketchup, we’re just garnish to them. That’s why, nine times out of 10, when a dude walks up to a coven on the dance floor, he’s approaching a Circle of Death.

What this cat sees when he walks up is one fine woman surrounded by two to four less attractive women. (Although there’s a chance that one of the others might also be cute, I’d feel more secure betting on Dr. Dre’s “Detox” to drop before Christ’s return. I’ll get into why this is true in Part II.) What this means is that he’s not only got to overcome any natural obstacles a woman might have to him personally, he’s got to deal with the fact that he just broke up their little Wiccan Beyoncé ritual. And that shit don’t fly. Unless you’ve got the goldenest of tongues, you’re pretty much toast. And not the buttery-and-flaky-but-still-soft-on-the-inside kind. I’m talkin’ about the scrape-the-black-off-it-but-you-gone-eat-it-’cause-we-broke kind. No bueno.

This shit is a travesty and a tragedy, and it’s gotta stop. Not only are you ladies doing us gentlemen a disservice, you’re doing your country a disservice. That’s right. I said you’re being un-American little bastiches.

Cats ain’t got no money to be rollin’ out to spots, buying drinks and whatnot, only to leave with nothing to show for it! Don’t y’all muthaphuckas know times is rough out here in this piece? Every dollar that a man spends paying to get into Black Lion, or Club Cheetara, or Castle Greyskull, is a dollar that could have gone to buying the new PSbox3 console. Every bar charge on his pre-paid debit card is one less dollar to give to Kandi and Kookie, the stripper duo he’s altruistically supporting as they make their way toward University of Phoenix Extended Junior Associates Degrees. Shame on you. Again, I say shame!

Now, before you start bringing up old shit about how this is a free country and all, save your breath. I know that you have the right to live your life as you see fit (until the next time the Republicans control all three branches of American government). If you want to roll out to the spot and get your drink on and party and dance with your girls while you give me and my brothers some analogical, girly version of the Heisman, go right ahead. I’m just saying that if you’d like to gather all your girls together and dance in a circle, sans hommes, you COULD just save us dudes some frustration, stay your frigid asses at home, and have a goofy-ass, manless slumber party.

Or you can join some kind of indigenous tribe. Either one.