After Ferguson, Is Violence An Answer?

For my initial commentary on the killing of Michael Brown, see my earlier piece, “No Escape: The Realities of Living with Police Violence.”

I watched the post grand jury decision protests in Ferguson morph into a riot on live television, and by the time a police cruiser went up in flames my blood was boiling. I was afraid, but there was more than a little excitement coursing through me, too. I could hear the part of me that I usually don’t bring to dinner parties whispering, “Take this to Clayton. Take it to Ladue. Take it to the suburbs that white folks actually care about.” And it was that small, dark prayer that led me directly to a question: Can violence in any way help Black America in its struggle for justice?

As those thoughts crawled around my head, I tried to squash them. They embarrassed me. I knew that, one way or another, rioting would inevitably produce innocent victims. Still, I’ll be damned if watching it all unfold didn’t make me feel alive on a day in which the central message appeared to be that, at any moment, I could be killed with impunity. After a few hours though, I made an uneasy peace with that surprising sense of vitality. In so doing, I realized that I was actually entertaining the possibility, no matter how distasteful or remote, that rioting might have a role to play.

A protest is a sternly written letter to the management. 21st century America is immune to them. You can march until your feet bleed, but unless you and your faithful companions are playing bagpipes or holding a string with a colossal, inflated cartoon character at the end, you will most likely fail to capture the American imagination. Violence, however, seems to work like a bloody charm. It’s in our national DNA.

In 1773, a group of American patriots demonstrated their displeasure with a certain British tax policy by dumping what would be the equivalent of over $1.7 MM in corporate property into Boston Harbor. Less than 100 years later, 11 southern states snatched a page from their colonial forbearer’s playbook and took up arms against the U.S. government, resulting in 620,000 deaths and an estimated $1.5 B loss in Southern physical capital alone (not to mention the billions in other direct and indirect costs on both sides), and that’s in 1860 dollars: it would be more like $39 B today. The slavers lost, but they’d made their point, and after a few short years they succeeded in resetting the clock on their social and political dominance of Southern life. Fast forward one more century and the American Civil Rights Movement, the very campaign created to counter the legacy of slavery and Jim Crow, was relying on violence for its effectiveness, too. Oh, it’s unequivocally true that Martin Luther King, Jr. appealed for non-violent action by protestors, but he knew very well that every blow from a policeman’s baton in Selma was worth 10,000 renditions of “We Shall Overcome” on national television. Police held those nightsticks, but they were King’s weapons.

I realize that burning and looting, even if executed in a tactically sound way, is a far cry from the noble social jujitsu that King et al. practiced. I’m not attempting to suggest otherwise. I am, however, suggesting that they both spring from a recognition that the only means of affecting change in a corrupt system is to dismantle it, either in whole or part. That process is chaotic and violent by its very nature.

If you believe that a solid proportion of your fellow citizens are aligned with your cause, no matter how quiet they may be, you might be encouraged to press forward with less aggressive displays of frustration, hopeful that those demonstrations will turn silent supporters into active advocates. On the other hand, if you find that despite crying out until your voice is a memory, most of your neighbors are either apathetic about your cause or worse, antagonistic, it becomes more difficult to trust that signs and songs will save the day.

And it in fact, it does seem as if we’ve reached a point at which learning that unarmed black people are being beaten, gassed, and killed, even when the acts are perpetrated on camera, no longer elicits a sympathetic response from much of White America. Case in point, only 15% of whites agree that Darren Wilson should’ve been charged with murder for the killing of Michael Brown—not convicted, mind you, charged—as opposed to 59% of blacks. Then, just nine days after the Ferguson grand jury’s decision, we were told that Eric Garner’s killer wouldn’t be prosecuted either, despite the fact that millions of us watched the life get choked out of him needlessly, over and over again on YouTube and the news. How can you find common ground with someone when you apparently live in entirely separate dimensions? 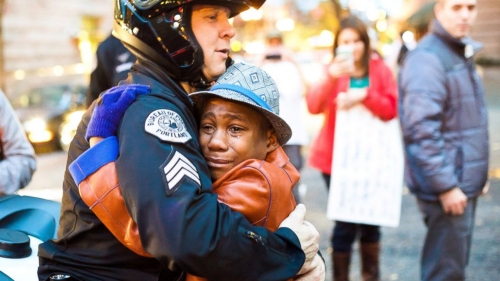 Here’s to hoping that this image is the first word in an answer to my question. (Credit: Johnny Nguyen)

It should be apparent that I have no answers to present here. I don’t fancy myself a revolutionary. I’m certainly not foolhardy enough to think that any sustained violent interaction with the police or other authorities would ever lead to the establishment of a somehow more just regime in our country. And I’m loath to picture an America where destructive clashes with the powers that be become as common here as they are in…well, much of the world touched by European colonialism. Yet I now find it difficult to rid myself of this question of violence, and I’m a thirty-something MBA who’s a product of prep school and the Ivy League.

Many of the people in my circle share similar pedigrees, and I’ve been shocked at the number of them who’ve almost squealed in agreement when I’ve relayed my dismaying thoughts about the Ferguson riots. We are not disaffected urban youth with nothing to lose. Not by a long shot. We’ve got careers, and summer shares, and kids. And still, here we are, basking in the televised glow of a burning cop car, asking ourselves whether launching a brick through a window might bring us at least some small measure of psychological relief. It’s a question we don’t want to ask, but it’s becoming difficult to avoid. And that should scare America to death.